Why Choosing a Good Blender is Important

Now that you’ve set a clear goal for your weight loss program, you’d probably be ditching all the junk food in favor of the healthier home cooked meals.

But I can tell you that accomplishing that lofty goal of shedding 10 pounds on your waist may require some level of determination. Getting a blender is only the first step. But if you want to increase your chance of success, it is important that you get yourself not just a blender, but a good blender.

If you’ve been eating out all this while, going on such a diet can be a torture. That’s when smoothies and soups would come in quite effective in smoothing out the transition process.

That’s when a good blender can really help. But what defines a blender as good?

To be honest, if the budget is taken into the equation, everyone dreams of having a Vitamix or Blendtec as part of their kitchen gadget line-up.

But just like owning a car. If you need a car to travel, do you wait until you can afford a Ferrari before you buy your car? Absolutely not!

The same logic applies to blender purchases. NutriBullet NBR-1201 Hi-speed blender may not be the ultimate blender if $$$ is not taken into account. But if $$$ plays a part, it’s a different story.

Let’s see what the NutriBullet NBR-1201 has to offer.

What’s to Love about NutriBullet NBR-1201 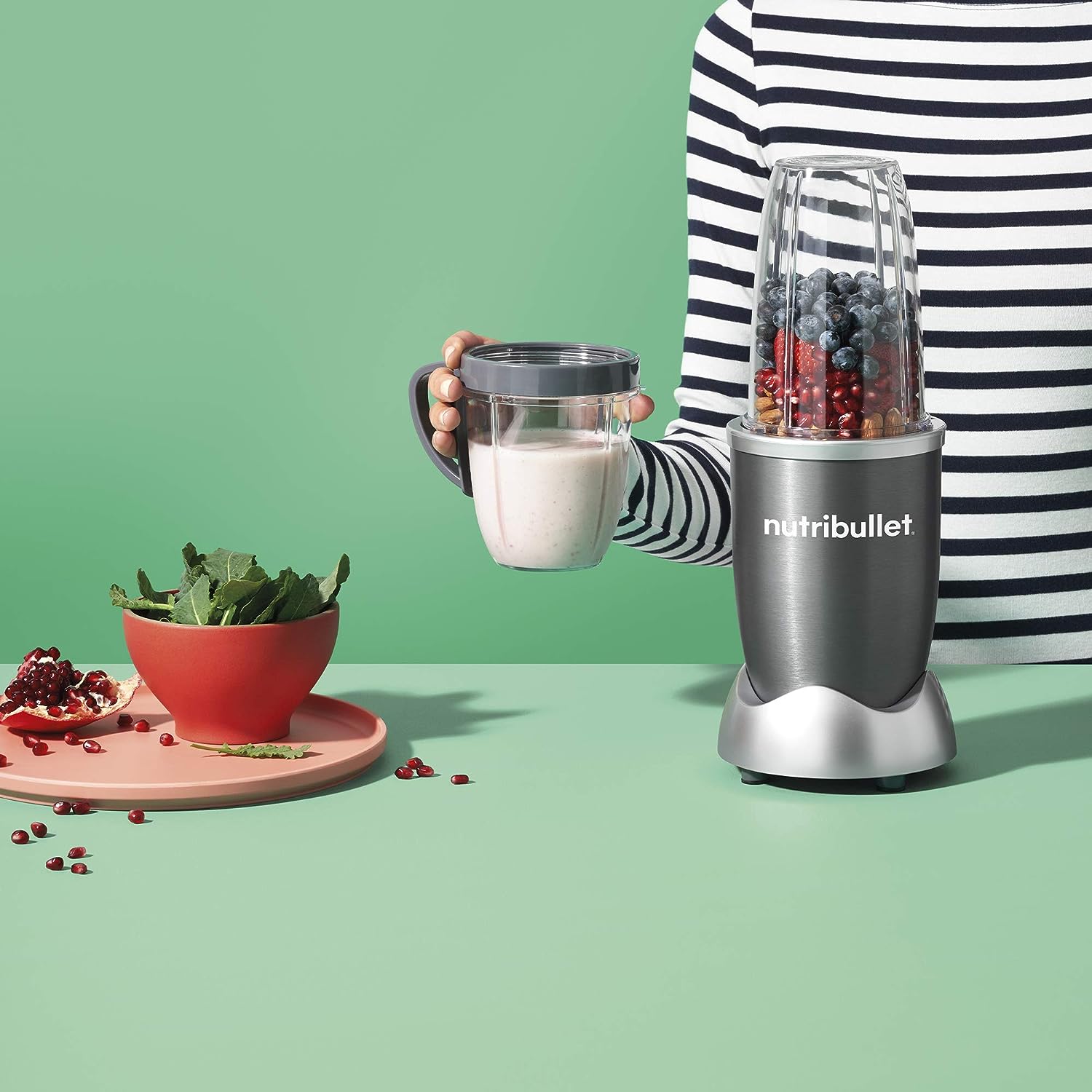 One thing about NutriBullet NBR-1201 that gets talked about most often in any Nutri Bullet review is its simplicity.

How traditional blenders work is after you place the jar into the base, you start the job by pressing the ‘ON’ button. I spend lots of time in the kitchen (and with my blenders too) and I often run into a mess.

There are many occasions where my hands are all messed up. Pressing the button to get the blender started sounds trivial but not when you’re fully occupied. Too often, I have extra cleaning to the buttons which I’ve touched when my fingers were wet and oily.

With the NutriBullet NBR-1201, this will no longer be an issue. How it works is really simple.

Fill up all your favorite ingredients (blueberries, strawberries, grapes, banana and etc) into the jar. Fix the blade into the jar. Fasten it into the base and it’ll start its job.

Simplicity is what makes Nutri Bullet’s blender click! At least for me, it’s what matters most.

If you’re into this whole ‘smoothie craze’, you’d be delighted to know that NutriBullet NBR-1201 simply delivers. But again, let’s be fair.

When I say it simply works, I’m not saying it is the best blender for green smoothies. Though it may not produce the finest smoothies, it does churn out excellent smoothies quite consistently.

And then there is the milling blade. It does a decent job of chopping nuts, seeds, and herbs that are essential ingredients for my soup.

What more could I have asked for? You tell me.

If popularity is any indicator, this will be it!

I remember that prior to making my NutriBullet NBR-1201 purchase, I went through all the review materials that I could stumble upon.

I watched the infomercial. I read the blender reviews shared by Nutri Bullet owners. I seek opinions from my cooking buddies who happened to have owned a Nutri Bullet before.

If that’s enough for you to call me a freak, I didn’t stop there. I went on to a few of the big box stores around my area.

Surprise, surprise! In fact, the finding that I gather from my ‘field trips’ was what moved my conviction to buy.

When I was at the first store, I was told that the NutriBullet set that I was looking for had been sold out. At the second store, I was greeted with the same situation. It was only during my third stop that the unit was available.

But it turned out that the unit was a display unit. So I went on to ask the sales lady about what could be happening.

“We cannot keep them in stock, they sell out very quickly,” that was the explanation I get. Later on, I decided to make my purchase online.

But if popularity is used as a gauge on consumer satisfaction level (and hence the product quality), we have a winner in Nutri Bullet.

What’s to Whine about NutriBullet NBR-1201

No product is made perfect, that’s for sure. But with NutriBullet NBR-1201, I’m not aware of major blender reviews that pose significant concerns. At least, major issues that would stop me from recommending it to my mother.

There is 1 issue that frequently surfaces in a number of blender reviews shared by Nutri Bullet owners. It is the leaking issue.

As I didn’t have such an issue with my unit, I initially thought it was due to a manufacturing defect. Instead, it turns out that misuse rather than defect is what contributes to the leaking problem encountered by so many owners.

That’s what happens when you skip the manual! You’d run into the leak issue if you carelessly overfill your jar container. Otherwise, you should be safe.

Is it a Good Buy?

I’ve shared with you the story I have with my NutriBullet NBR-1201 blender set. I’d love to hear from you if it has indeed been a good buy.

The key takeaway here is if you’re into this whole smoothie craze thing and you’re not ready to splurge hundreds of dollars just for a blender unit, this 12-piece set from Nutri Bullet might just do the trick.

It’s not a Ferrari. But you don’t need a Ferrari to get you going!

I am Lily Maravilla.

Ninja BL660 Review: What Can Ninja BL660 Do for You?
Next Post: 3 Green Smoothie Recipes that Doesn’t Taste Awful